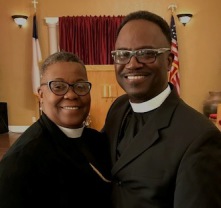 Our Pastor was born and raised in Toledo, Ohio.  He is the third of six siblings. After completing his secondary education, although learning he was the recipient of two art scholarships, he chose, instead to serve his country. In 1973 he enlisted into the United States Air Force and served eight years until he received an honorable discharge. Pastor married Alisa M. Key (our First Lady) on July 13, 1991 they now enjoy twenty-four years of marriage. They have two daughters Asja and Jasmine, and three grandsons Tyler, Eddy and Donnell, two granddaughters Aryanah and Chloe.

Pastor spent a lifetime in People's Missionary Baptist Church and confessed Christ at the age of five under the pastorate of his godfather the late Rev. W. E. Graham, who was also the founding pastor. The Lord led him away to Friendship Baptist Church under the leadership of Bishop Duane C. Tisdale where in 1996 he accepted his call into the ministry. After two years of ministerial and servant training he was licensed to preach in 1998. That following year he was ordained as an Elder.

He always knew there was a calling for him. In 2005 he made a full circle, steps ordered by God, he returned to the People's Baptist Church. Our pastor is a true servant of God and faithfully serves our congregation and community. He assumes many duties as pastor but loves to see God’s people empowered to do every good work.

Our Co-Pastor was born and raised in Toledo, Ohio. She is the youngest of four siblings. She began her work in the church as a Christian Education teacher for 3rd and 4th graders. It led to many years of service in the Junior Church Ministry of Friendship Baptist Church under the leadership of Bishop Duane C. Tisdale. She accepted her call into Ministry in 2005 and was licensed in 2009.

In 2010 she joined her husband as the First Lady of People's Missionary Baptist Church. In 2013 she was ordained as Elder. Her passion is ministering to young women fostering growth and seeking the mind of Christ. Our first Lady is blessed with the gift of discernment. She is an advant teacher and has the ultimate responsibility of Intercessor as part of our Intercessory Prayer Ministry. In 2015 our First lady was elevated and now serves as Co-Pastor working side by side with her husband, Our Pastor. In October 2019 she birthed Women With the Word, Inc. a Ministry empower women across the globe through teaching, preaching, mentoring and motivational speaking.

What Keeps Us Going

We are excited about the work we will be doing in this community!!

God's Manifestation will reveal itself to those who walk in the Light!!

We're here to welcome you!